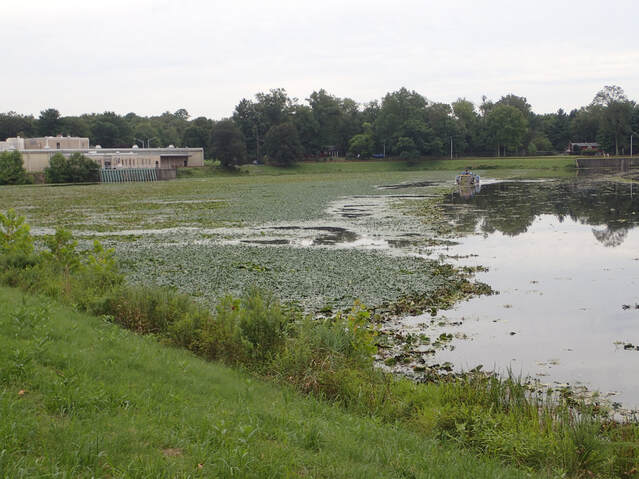 South Branch Pumping Station and intake pond
The New Jersey Water Supply Authority operates the South Branch Pumping Station, located at 512 River Road in Clinton Township. The Pumping Station, built in 1965, moves water from the South Branch of the Raritan River to the Round Valley reservoir by a large underground pipeline. Round Valley reservoir is part of a larger water supply system supply called the Raritan Basin system, which also includes the Spruce Run Reservoir and the D&R Canal. The Raritan Basin system provides the basic  source of water supply for approximately 1,500,000 central New Jersey residents.

During the construction of the South Branch Pumping Station, facilities were constructed to divert the river through an artificial channel and create a “pond” suitable for pumping. The pond covers roughly nine acres. Over time, mostly during rain events, sediments from the river settle out in the pond and channel. The pond and channel must periodically be dredged to remove the accumulated sediments and maintain the ability for the pumps to work.  The last time the pond was dredged was 1986.  The channel was last dredged in 2013.

Beginning in March 2020, the Authority’s contractor, Mount Construction, will begin a project to dredge the pond and channel. The pond will be drained and the excess sediment that has settled into it from the river over the past 34 years, estimated to be 33,000 cubic yards, will be dewatered and then trucked offsite. In addition to the dredging, Mount Construction will also repair and replace other infrastructure components related to the release structure of the pond.

Construction is scheduled to last about 5 months.  Increased construction vehicle traffic should be expected for the duration of the project.  Trucks carrying the dewatered sediment will be traveling along River Rd, Lilac Rd and Allerton Rd to Route 31 between the hours of 7:00AM-3:30PM, Monday through Friday, for roughly two months.

We will do our best to minimize negative impacts to our neighbors while we undertake this important project to maintain water supply for central New Jersey. Questions about the project may be directed to Aimer Garcia, Project Engineer, at agarcia@njwsa.org.